Every year, I write a post about the creche Jordan puts together for our home. Since he was four years old, Jordan has set up the manger scene for us. We've had some interesting ones.

This year has another unusual narrative. 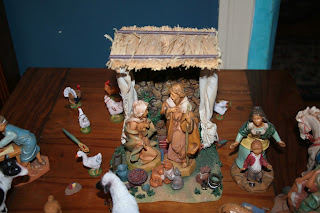 Mary and Joseph are in a small camp on one side of the room. They have lost the baby Jesus and are discussing how best to look for him. 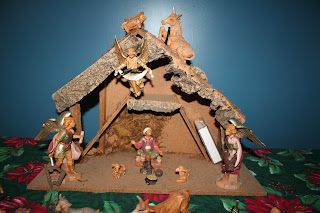 My son is definitely imaginative. This isn't the biblical Christmas narrative.


Then again, maybe what we should be doing this season is looking for the baby. Looking for Jesus.

A Very Merry Christmas
to You and Yours!!

Posted by Melinda at 4:02 PM No comments: Links to this post

Song for Sunday: Mary Did You Know?

A link for enjoyment on this Advent Sunday of Joy. 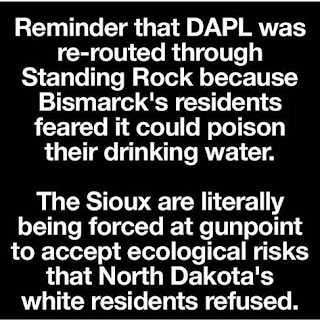 I came across this meme, which is the wording of two tweets by a Sioux Tribal Leader.

I am in sympathy with the Sioux and oppose the positioning of the pipeline where it threatens their water supply. My son wants to go the camp and protest with the Water Protectors.

I rejoice that the latest court ruling halts the pipeline's construction and signals a new level of respect for indigenous communities.

I also recognize this fight isn't over. New threats may pop up, especially since the DAPL is mostly finished.

However, I also have done some reading. The pipeline was rerouted away from Bismarck because the Army Corps of Engineers for several reasons, one of which was potential danger to Bismark's drinking water before those residents needed to protest -- or even heard about it in most cases.

So this meme has it's heart in the right place, but is a bit off as to facts.

Regardless, the camp was made by the government into a more or less militarized zone. Officials acted horribly, spraying water on the protestors, etc.

So hopefully all this will be sorted out, people will keep standing with Standing Rock and a safer way to transport fuel will be found.

Posted by Melinda at 9:22 PM No comments: Links to this post

Song for Sunday: I Wish You Peace

This second Sunday in Advent, according to my church’s liturgy for the advent wreath, is the Sunday of Peace.

In our world right now, peace is hard to find. There is war. There are people slinging names at each other across political divides, there are people doing violence to others because they are different.

Part of the Christmas message, though, is peace. A peace granted by God to all of us because His favor rests on us. Simple as that.

An ultimate peace will be found when Christ returns and His Kingdom is fully realized. May it be soon.

In the meantime, let us wish each other peace. Not just in words, but in action. Not just to fellow Christians but to everyone.

That’s why I Wish You Peace by  the Eagles  is today’s Song for Sunday,  Here;s a link for you to enjoy.